Why I should not use a single core for power saving

(default for Intel Sandy Bridge and Ivy Bridge CPUs on kernel 3.9 and upper) To change back to the ACPI driver, add intel_pstate=disable to your kernel parameters and reboot. Then execute modprobe acpi-cpufreq and you should have the ondemand governor available.

You can make the changes permanent by adding the following to /etc/default/grub:

What is a CPU governor

A CPU governor is an algorithm used to automatically switch between different CPU frequencies, generally based on the system loading. It allows CPU frequency scaling to save power. For more information, check out the kernel documentation about governors.

What is a MIXED mode 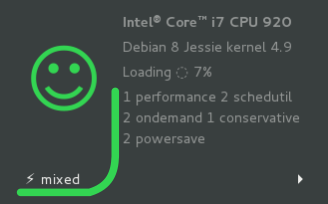 The mixed mode is a system state when processor cores can have different active governors (see the picture). This mode can be used for the power saving like an alternative to the switching cores off by selecting less power hungry governors and frequencies on desired cores.

We have 4 cores processor and want to make two groups: 1 core - performance mode and 3 cores in powersave mode. To do so we have to repeat next steps:

Accessible through top or uptime on UNIX systems, the cpu/system load is an averaged representation of the computer’s charge of work during a certain period of time. It’s calculated based on the number of process running or waiting for the CPU.

What is CPU thermal throttling

CPU thermal throttling is a security measure put in place to dynamically scale down the processor frequency when reaching a high temperature threshold.

Uninstall it and reboot your machine

See discussion on GitHub about the issue